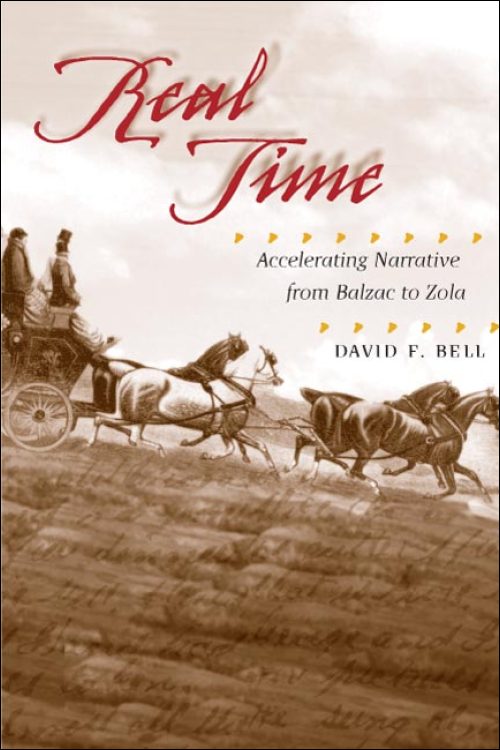 In Real Time David F. Bell explores the decisive impact the accelerated movement of people and information had on the fictions of four giants of French realism--Balzac, Stendhal, Dumas, and Zola.

Nineteenth-century technological advances radically altered the infrastructure of France, changing the ways ordinary citizens–-and literary characters--viewed time, space, distance, and speed. The most influential of these advances included the improvement of the stagecoach, the growth of road and canal networks leading to the advent of the railway, and the increasing use of mail, and of the optical telegraph. Citing examples from a wide range of novels and stories, Bell demonstrates the numerous ways in which these trends of acceleration became not just literary devices and themes but also structuring principles of the novels themselves.

Beginning with both the provincial and the Parisian communications networks of Balzac, Bell proceeds to discuss the roles of horses and optical telegraphs in Stendhal and the importance of domination of communication channels to the characters of Dumas, whose Count of Monte-Cristo might be seen as the ultimate fictional master of this accelerated culture. Finally, Bell analyzes the cinematic vision created by the arrival of the railroad, as depicted by Zola in La Bète Humaine.

"Real Time is written with clarity and elegance. David Bell demonstrates convincingly and brilliantly how technologies of communication and transportation had a decisive impact on representations of time and space in the nineteenth-century French novel and more generally on all narratives of this period."--Marcel Hénaff, author of Sade: The Invention of the Libertine Body and Lévi-Strauss and the Making of Structural Anthropology