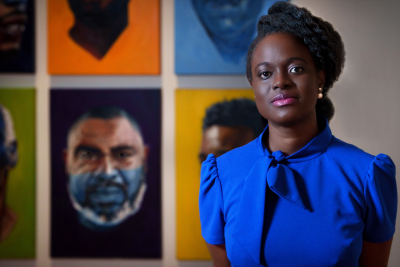 Annette Joseph-Gabriel joined the Department of Romance Studies in 2022 as an associate professor. An expert on Black women’s writings, anticolonial activism and slavery in the French Atlantic with a Ph.D. in French with a graduate certificate in African American and Diaspora Studies from Vanderbilt University, Joseph-Gabriel works at the intersection of French and Afro-diasporic culture, literature and politics.

Her first book, Reimagining Liberation: How Black Women Transformed Citizenship in the French Empire, received the Modern Language Association Prize for a First Book and honorable mention for the Eugen Weber Book Award for the best book in modern French history. Joseph-Gabriel has also published articles and essays in The Washington Post, HuffPost, Al Jazeera, The Conversation, Africa is a Country and Black Perspectives, and her writing has been translated into French, German, Japanese, Portuguese and Spanish.

We spoke to Joseph-Gabriel at her home in Durham about her research, her current projects, her approach to teaching, and what brought her to Duke.

What I find most interesting about Duke is its interdisciplinary nature­ — not just as something that happens on paper, but that is borne out in the types of work that faculty do and the possibilities for collaboration. This is important to me as someone who works at the intersection of French literature, women’s and gender studies, Caribbean studies and African studies.

The John Hope Franklin Humanities Institute has also been on my radar for a long time as a site of robust collaboration and bringing people together, and I’ve long admired the humanities lab models here at Duke.

What are your research interests and guiding framework?

Thematically, I have been focused on the single, central question: How do we account for voices that have been marginalized in historical narratives?

I approach that question not as a historian, but as a literary scholar. I’m interested in the narratives we tell of people whose stories otherwise haven’t been told; it’s a broad question that cuts across geographies and time periods.

My first book tries to answer that question with a focus on French colonies in the 20th century, particularly trying to be attuned to what we understand about citizenship when we listen to Black women’s voices.

What are some projects you’re excited about working on this year?

My first book looked at women, colonized people as authors and thinkers who theorize some of the ideas that remain key concerns for us today: citizenship, freedom and personhood. This new book works through the same question as my first — how we account for voices that fall out of the narrative and how we understand citizenship when we listen to those voices — but I’m examining how enslaved children in the 18th and 19th centuries, as authors, tackled questions of citizenship, personhood, belonging and freedom at a time when those questions were very much front and center throughout the Atlantic world.

The second book came out of working on a digital map that traces the movement of enslaved people throughout the Atlantic world. While I was working on the map, it struck me that a lot of these people were young people, so I wanted to pull on that thread.

What is your approach to teaching and learning?

I like to involve my students in public-facing projects because I find that the intrinsic motivation allows them to be more creative and take more risks in their work; when I’m not the only audience for the work, they tend to do things that are really interesting, and one of those things is the digital map.

The map is composed of student projects from two courses I’ve taught. I provided an example, and the rest of the content is from students telling the stories of enslaved people, often for the very first time.

I am also experimenting with grading. Generally, I’m not satisfied with traditional grading, particularly with the ways it’s inadequate in a pandemic. A student asked me: what if someone gets sick? So, over the past few semesters I’ve been experimenting with something called “gameful grading” where students are provided with more assignments than they need to achieve the maximum grade in the course.

At the beginning of the semester, each student sets a goal for themselves, and they track their progress and recalibrate as needed. Maybe they turn in three smaller assignments as their preferred approach, or perhaps for the risk-takers one big assignment at the end of the class suits them best.

This pedagogical model allows for rolling deadlines — which I’m able to accommodate because I don’t teach very large classes­ — as opposed to assuming that everyone has the same opportunities to complete the same type and number of assignments on the same timeline.

Of course, institutional support is key for this to work. It allows us to teach in humane ways that really put students at the center of learning.

A lot of this thinking comes from my research and by reading works like “Teaching to Transgress” by bell hooks and “Pedagogy of the Oppressed” by Paulo Freire, and thinking about how we replicate structures of power and surveillance in our classrooms — and how we might move away from that.

Maybe rather than replicating systems of power and surveillance, we can show students a different way to be, and maybe when they go out into “the real world” they will also create this new way of being. That’s my hope.

It’s still very experimental, but I imagine there are other faculty who think along similar lines and I’m eager to connect with others who think likewise, both in teaching and in research.

What are some things you’re enjoying about Durham?

I love the food scene in Durham! Every Friday night we discover a new region of the world in our living room with takeout. It’s a great way to discover Durham restaurants and support local businesses.

We also love the Museum of Life and Science — it’s hard to pry my 2-year-old away from hours of digging in the dirt and rocks.