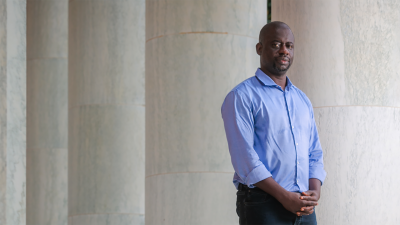 One important thing that hasn’t changed in a semester of the pandemic is the arrival of new faculty members. They come with new ideas, research problems and classes. Their importance in sustaining existing strengths and guiding Duke toward new areas of excellence can’t be underestimated.

“We welcome and celebrate our new faculty this year in the most unusual ways and circumstances, but with no less enthusiasm,” says Duke Provost Sally Kornbluth. “We have selected these faculty, and they have chosen to join us, to be a part of Duke’s thriving, ambitious, collegial academic culture. These new faculty will add notably to our excellence in teaching, research, and service, and to our vibrant community of scholars and learners.”

Read the full story, including the information posted below about our department's new professor, Felwine Sarr.

An internationally known public intellectual, Sarr’s research interests includes economics, development policy, arts, philosophy, music, literature and cultural studies.  A native of Senegal, he comes to Duke from Gaston Berger University in Senegal, where he has taught since 2007. He’s written numerous books and essays, many focused on intellectual decolonization in Africa, and published three large pieces of music. Recently, he was part of a team asked by the French government to report on the presentation of African culture in French museums.

“It is in the realm of the humanities that some of the most important questions about the current dynamics of African societies were being posed. Any approach to Africa’s economic past, present and future has to engage deeply with questions about culture and the arts, religion and philosophy, which have all been realms through which basic values and ideas about society have been developed and articulated within Africa. My current research revolves around two central issues: the development and writing of African humanities and the construction of an ecology of knowledge.

“My work broadly represents an intervention into the field of Francophone Studies. If we correctly consider that the future of Francophonie is in Africa, given that the majority of French speakers now live on the continent and that this preponderance will continue to increase in the coming decades, a better understanding of African societies of this 21th century is crucial for Francophone Studies.

“In the context of African French-speaking countries, such an undertaking raises the question of the sources and in particular the question of the oral sources, which I argue are carriers more than any other of the collective memory and beliefs of African societies. West African societies have experienced writing systems that have played differentiated roles in archiving and conserving their cultural heritage. Some writing systems were reserved for an elite, and others were more widespread. Many human groups did not need writing to transmit their cultural capital.

“Artifacts and objects can also play a significant role in an archeology of knowledges. They can help the rewriting of history, they encompass knowledge and indicates alternatives epistemological universes. Every societytransmits a heritage and perpetuates a cultural matrix that conveys its identity through time, transforming it as the world evolves.”