The Scramble for Europe: Young Africa on its way to the Old Continent 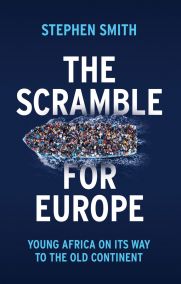 From the harrowing situation of migrants trying to cross the Mediterranean in rubber dinghies to the crisis on the US-Mexico border, mass migration is one of the most urgent issues facing the West today. At the same time, viable solutions seem ever more remote, with the increasing polarization of public attitudes and political positions.

In this book, renowned journalist Stephen Smith argues that current events must be understood as part of a dramatic demographic shift. Today, 510 million people live inside EU borders, and 1.25 billion people in Africa. In 2050, 450 million Europeans will face 2.5 billion Africans – 5 times their number. The demographics are implacable. The scramble for Europe will become as inexorable as the “scramble for Africa” was at the end of the 19th century, when 400 million people lived north and only 200 million lived south of the Mediterranean. Then it was all about raw materials and national pride, now it is about young Africans seeking a better life on the Old Continent, the island of prosperity within their reach. If Africa’s migratory patterns follow the historic precedents set by other less developed parts of the world, in thirty years, Europe will include at least 150 million Afro-Europeans. Seeking to address the question of how Europe will cope with an influx of this magnitude, Smith argues for a path between the two extremes of today’s debate, advocating migratory policies that strike a balance between compassion and the interests of European nations.

The result of years of research by one of the leading experts on contemporary Africa, The Scramble for Europe will be of great interest to anyone concerned with the great social and political questions of our time.