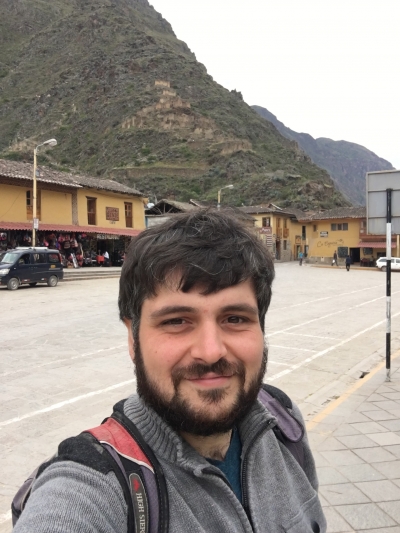 Dulceany is a Romance Studies graduate student, focusing on Spanish and French studies. He has also been awarded a scholarship to study Haitian Creole this year.

Dulceany attributes his decision to study at Duke to his ability to make connections between his numerous interests while here: “I decided to come to Duke because of the emphasis on and many resources available for interdisciplinary research. I was also drawn to the strong research focus in Latin American and Caribbean studies. As an advanced graduate student and a highly active participant in the various programs, exhibits, conferences, and labs at the Franklin Humanities Institute and the Center for Latin American and Caribbean Studies, I can vouch for the vibrancy and variety of the intellectual community at Duke.”

Prior to attending Duke, Dulceany completed his B.A. as an English and Spanish double major with a minor in Psychology at DePaul University and he holds an M.A. in Comparative Literature from Dartmouth. He is also a former Fulbright fellow to Romania, where he taught a course in Latino Studies at the University of Bucharest.

He is currently at work on his dissertation entitled, “Contesting Iconography and the Constitution of Caribbean Nations: Cuba, Haiti and Puerto Rico,” which is an examination of images, archival documents, and literary texts from the intersecting perspective of religious symbolism and economic theory. It is a transnational and comparative project that highlights the centrality of iconography in the Caribbean through an analysis of highly circulated but rarely researched images representing transformative historical moments in three exemplary Caribbean nations.

Richard Rosa serves as his dissertation advisor and he is currently working with department faculty members Deborah Jenson, Laurent Dubois, Claudia Milian, and David Bell in addition to faculty at UNC.

While he spent the majority of his fourth year in Cuba completing research, Dulceany came back to the department last spring to present the ongoing “My Other Body” project, a documentary study composed primarily of photography and interviews with a wide array of LGBT identified Cubans, especially transgender and gender fluid individuals. The goal of the project is to connect artists, scholars, and activists from Cuba and the US interested in LGBT representation and rights. This event joins a number of others Dulceany has previously helped occur through his co-founding of the Ocean Crossings working group.

When not working on his dissertation, Dulceany enjoys being involved in the local poetry community and has served on a literary and arts review board.

The proud son of immigrants from Romania, Dulceany hopes to mentor other first generational college students as a future professor of Caribbean literary and cultural studies.