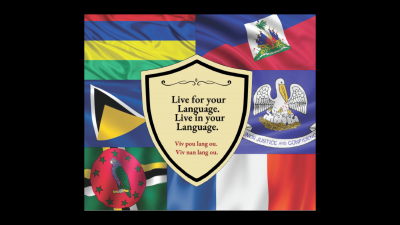 Friday, October 28, 2022 will mark 39 years since International Creole Day began to be celebrated worldwide and 10 years since the day began to be commemorated here at Duke University. In the last decade, what first began as a spotlight on the works of scholars whose focus was on Haitian Creole has since shifted to a space that is open to all scholars working on any French-based Creole. By educating the audience on the particular Kreyòl of these scholars, a linguistic bond may be forged between countries where a French-based Kreyòl is spoken. At least, that’s one of the hopes held by Jacques Pierre, Lecturing Fellow in Haitian Creole & Culture in the Department of Romance Studies, when coordinating programming for the day. After all, for Mr. Pierre, International Creole Day

“represents a huge thing for kreyòl speakers around the world, especially in my native and beloved country, Ayiti. It’s a day for Kreyòl speakers to promote the language as well as the culture while boosting their linguistic confidence. Fifty years ago, Kreyòl speakers did not have the opportunity of being taught in their mother tongue, and none of the French-based Creoles was recognized as an official language. In the last 30 years, there’s been a lot of progress made here and there in my beloved land, but we are still far behind because there’s not a clear and viable linguistic plan from Haitian authorities to reconcile the nation with its linguistic roots. At any rate, International Creole Day is an important moment for Kreyòl speakers, and I invite Haitian writers, scholars, teachers, and so on to produce in their language pou n viv an Kreyòl.”

Indeed, the historical challenges faced by Kreyòl speakers in Haiti only emphasize the importance of a day like October 28th for Kreyòl speakers around the world and to countries like Ayiti, Saint Lucia, Seychelles, and Dominica that celebrate the day with much fanfare.

Here at Duke, the day will consist of an opportunity to hear from the Owner-Chefs of Bon Fritay, the first Haitian food truck in North Carolina, and sample food they have prepared from 12:00 to 1:00 PM. This event is part of the Nourish series and Professor Laura Florand’s Fall 2022 French 309 Manger class. As Mr. Pierre puts it, “manje ayisyen se koupe dwèt.” The latter half of the day’s events will take place on Zoom from 5:00 to 7:00 PM, as it has for the past two years due to the pandemic. Since the start, part of this time has been allotted for one or two students to share about their linguistic journey in Haitian Creole or their project as it relates to Haiti. This year, Ariana Aviles, a PhD candidate from UNC at Chapel Hill whose Foreign Language and Area Studies (FLAS) Fellowship has allowed her to study Creole at Duke University, will be sharing an excerpt from her dissertation. The second presentation will be given by Dr. Michel DeGraff, a MIT professor in the Department of Linguistics whose research on Haitian Creole is extensive and runs deep.

Participation in International Creole Day has been rising every year. However, the interest in Haitian Creole does not end just because the festivities do. In fact, Creole Studies at Duke is growing yearly, with Mr. Pierre offering two or three classes in the subject every semester depending on demand. Students can learn the basic elements of the language and culture via Haitian proverbs and thus prepare for a field trip to Haiti. During this learning experience, Mr. Pierre asks that people keep the following in mind:

“The first sign of respect to show to a linguistic community when you plan to work with it is to learn its language. Let me take the opportunity to ask everyone who is interested in writing about Ayiti to learn Haitian Creole so that they can have a broader view of what is happening on the ground. That being said, monolingual speakers of Haitian Creole should have their say in whatever debate relates to the betterment of Ayiti because they are the ones who have been linguistically and politically marginalized depi ti kòkonm t ap goumen ak berejèn.”

Kreyòl pale, kreyòl konprann. Let this be an invitation for Haitian writers, scholars, teachers, and so on to produce in their language, an opportunity for Kreyòl speakers everywhere to tell the rest of the world their languages matter too, and a call pou n viv an Kreyòl.