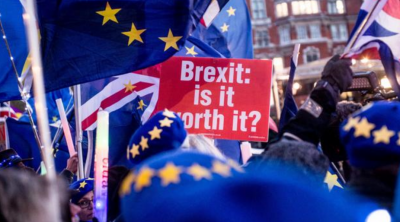 Cristina Garcia Ayala, a student in French and Italian, surveys Duke students to discover how Brexit, taking effect on Jan.  31, registers on them.

The date for Brexit, Duke students now note, has been set for January 31st, 2020, exactly 3 months after the previous date of Oct. 31, 2019. The European Union has announced this third extension of the deadline, on top of the two already agreed-upon. This has been attributed in large part to the continuous stalemates in British parliament and the severe lack of preparation of the Boris Johnson administration which won the December 2019 election, giving the Conservatives their biggest majority since 1987. The third extension is yet another burden adding to the already numerous events that have exhausted the British and Europeans alike. The precarity of Brexit can easily be expressed by the fact that the only action the British parliament can agree upon is to extend the deadline. UK and EU citizens remain uncertain if the complications arising from misdirected leadership will lead nowhere or instead snowball into an even bigger mess. At Duke, students affected by the break remain pessimistic about the British administration’s lack of coordination. Hailing from London and major European capitals, these Europe-based students emphasize the precarity of the situation in showing how it affects university students across the continent. This piece follows them throughout the months beginning Oct. 31, 2019. It reflects the unwavering anxiety over Brexit and students’ constant pessimism about the situation.

According to an investigation conducted by The Guardian, the tens of thousands of Britons seeking residency in EU countries in the case of a no-deal Brexit will most likely face fees up to $270, tight deadlines, and minimum salary thresholds. Self-employed Britons in particular will be burdened with monthly reviews of their income that would reassure EU governments of economic activity and the sustainability of UK expat lifestyles in the EU. For Lara Hansen, even with the numerous Brexit extensions, the UK administration’s handling of the transition can be summed up in one word: “terrible.”  Hansen is an exchange student from the Freie Universität in Berlin, and is in her last year, studying political science and journalism.  Originally from a small rural town near the Danish border of Germany called Risum-Lindholm, she has been living in Berlin for almost 3 years now. Moving from a farm to one of the most diverse and popular capitals in the world, Hansen is well-attuned to the impact Brexit is having, not only on life in Germany, but across Europe. She finds that the polarization of the UK parliament and Boris Johnson’s ascension reveal a snowball effect of chaos from long before the Brexit referendum, no matter the extensions. 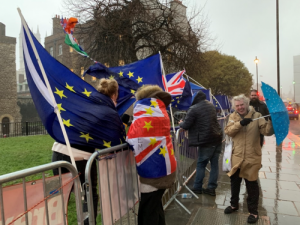 This is echoed by Ailin Cheng from England, who sees Brexit as a mechanism in the “power struggle” between parties in the UK. Cheng is a final year student currently majoring in English at Oxford University who hails from Twickenham in south-west London.   Born in Beijing, China, she moved to London with her family when she was 2 years old, and is a UK citizen. Her parents come from more rural areas of the Hebei Province in China, right outside of the city. This combination of her interests in literature and her international background makes her particularly sensitive to Brexit as an intercultural phenomenon, and it frustrates her a great deal.

Santiago le Jeune, from Belgium, on the other hand, finds that despite the close calls that have led to extensions, a total collapse of relations between the EU and UK is unlikely.  “Legislation has been passed to prevent a no-deal Brexit,” he said in late October, “so I don’t think a disastrous crash will occur,” regardless of the speculations of others.  However, as of this update, Jan. 20, 2020, there is still no clear plan for maintaining EU-UK relations.  Le Jeune, born and raised in Brussels is a Pratt sophomore studying mechanical engineering.  While he has lived his whole life in his hometown, that’s not the case for his parents. His father was born to Belgian and South African parents in the Democratic Republic of the Congo. His mother, on the other hand, was born and raised in Madrid, Spain. Growing up in a household of so many cultures has shown Le Jeune how to embrace the dialogue between cultures, even in times of conflict and disagreement; hence his optimism.

Nevertheless, the uncertainty surrounding Brexit’s outcome has “greatly reduced the credibility of politicians in the UK,” according to English senior Lucas Tishler. The lack of planning around choosing between a deal or no deal has led Europeans and British alike to speculate about the costs that any form of Brexit would accrue. Tishler is a fourth-year economics major at Duke and the son of British and Italian parents. He is originally from Hounslow, a borough in West London. He also studied at the London School of Economics in 2017, and voted in the Brexit referendum by mail his freshman year. Tishler mentioned that ever since the vote, he has actually stopped following the Brexit situation because it is so long and drawn-out.

In the case of the 3.6 million EU citizens residing in the UK, they would have until the end of next year to register for settled status through the UK government. EU governments are looking for windows to create bilateral settlements with UK companies to retain the economic status quo. This is particularly worrisome for low-income Europeans. Although they are not represented among those I interviewed on campus, they remain at the forefront of the students' minds when they discussed the overlap of economic privilege and Brexit’s effects. Hansen points out that Brexit has particularly huge implications for EU students seeking an education outside of their respective countries. Hansen herself was originally planning to study in a university in the UK instead of Duke, but because it wasn’t clear what the outcome of Brexit would be, she forfeited applying there and instead looked for programs in other countries as her school in Germany advised. “What if Britain’s economy sinks into chaos? If the whole of the UK leaves the customs union, which seems to happen with Johnson’s deal by the end of this month [October], the UK will probably have to battle with higher prices for goods, and as a consequence, higher inflation,” she said last fall.  The inability for university students to predict what their economic and academic status will be in a matter of months is another burden on the already economically precarious place of needing to budget for their education.

This fear of limbo has translated into decreased trust in and legitimacy of British officials. “Belgians have an even worse impression of the UK after Brexit than before. Brexit made the government look unprepared since they said they would leave without having a plan in place. Our view of British citizens changed for the worse. Brexit made many people realize how much underlying nationalism there is in the UK,” Le Jeune said about the current situation in his home country. This in turn has spurred other countries such as Belgium to develop more isolationist and nationalistic tendencies. Because of the UK government’s lack of commitment to follow-through, there is a lack of meaningful dialogue between both sides of the aisle and both sides of the English Channel, according to Alberto Garcia, who moved to the US from Spain in August to start his first year at Duke. Alberto is from Granada, a city in the southwest of Spain with a rich multicultural history shared with North Africa.

This continuous cycle of extending the Brexit deadline demonstrates a lack of consideration for the people most affected by it: Brexit puts them in a state of limbo. Brexit is already extremely unpopular among young Europeans, according to Hansen. In Berlin, she sees “Europe changing; from tearing down the Berlin Wall and having so much optimism and energy for reunification, to confronting isolationism and nationalism that Brexit spurred. It is like we are putting up the same kind of wall we celebrated tearing down all those years ago.” 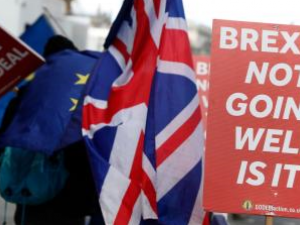 Ailin Cheng echoed this: “At this point I don’t even know if it’s going to happen because things are such a mess. It seems like the UK has spent the past two years just stagnating while politicians argue.” Issue after abstract issue brought on by Brexit and its uncertainty make it difficult to be optimistic about its outcome. What we do know, however, is that unless both sides can heed the fact that the stability and safety of thousands of people are more important than their personal interests, Brexit negotiations will continue to be inefficient.

In this January 31st, 2020 update, we can see that the precarity and inefficacy of this situation has not changed. With the eyes of major media outlets in the U.S. and Europe turned to the breakdown of relationships between the Duke and Duchess of Sussex and the British crown, even now there is certainly a lack of critique and scope surrounding the situation of Brexit. This is particularly problematic given the massive economic impact that Brexit will have on all parties involved, an issue far greater than familial separations of the Crown. To this day there is still no formal plan nor an inkling of one in order to ease the transition of Britain out of the EU.  The situation will continue to escalate, unraveling further into the future.