Kate Driscoll Studies Italy, Poetry and Whose Stories are Told and Remembered 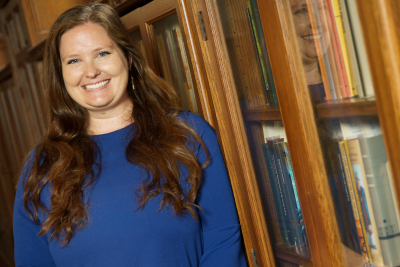 Kate Driscoll’s career as an Italian literary historian began with her love of music.

As an undergraduate flute performance major at New York University, the assistant professor of Romance Studies was already proficient in Italian musical terms like “vivace” (lively and fast) and “andante” (at a walking pace).

“I always knew there was something in the music that was telling me to go to Italy,” she said.

In the spring of her junior year, Driscoll studied abroad in Florence and immediately became enchanted by the Italian Renaissance, along with the city’s art, theaters and museums. It was then that she decided to combine her two passions and add a second major in Italian.

After an M.A. in Italian Studies from NYU and a Ph.D. in Italian Studies and Renaissance and Early Modern Studies from the University of California, Berkeley, Driscoll is now a scholar of early modern Italian culture – a period covering the 14th to the 17th centuries, or roughly the end of the Medieval period to the Enlightenment. But her performance background still lends itself to her current research.

Her newest project is an exploration of the literary side of opera and the ways in which epic poems and opera libretti speak in conversation with one another – or specifically, how an epic evolves into an opera.

“In epic poetry, there are counter-narrative tendencies uttered by figures who lament the hero’s journey, resisting the completion of even the poem itself, and those are the figures we often remember the most,” she said. “I like to think about how themes get translated into performance and reach audiences beyond readers. How does the stage make and unmake history?”

Those questions draw Driscoll to operas based on epics, alongside those drawn from colonial records. “By engaging with how poetry and poetry-in-performance confront the futures of history, we listen more closely to the characters of resistance and the new stories they have to tell,” she said.

In other words, Driscoll’s work explores notions of group identity, authority, and audience – and historical interactions between writers and readers of different sorts.

An expert on Torquato Tasso – a 16th-century Italian poet who has a street named after him in virtually every major Italian city – Driscoll’s work challenges the dominant discourse on Tasso’s isolated status in literary history by bringing to the forefront the crucial role played by women writers, performers and patrons in the earliest reception of the poet and his works.

“My book [on Tasso] takes the all-too-famous narrative of a lonely poet who labored in solitude over his texts – in prison no less – and reinserts it into the vibrant history of Renaissance sociability and community –– and women,” Driscoll said.

“Renaissance Studies have long been about individual genius and individual works of art,” she added. “I bring to the table new questions: What histories of collaboration and reciprocity have we overlooked in emphasizing the singular over the collective? Where is their dialogue in traditions of monologue? And how have women been displaced from histories of interaction and collaboration with men?”

These critical ideas about how one relates to history, and about dialogue as a cornerstone of collaboration, are concepts woven into Driscoll’s approach to teaching.

“As early modernists, we study a history, but we're also constantly recreating that history,” she said. “How stories get told and who has the power to tell them are fundamental questions we ask in my classroom.

“For first-year students and graduate students alike, it’s essential to study how the library of the Italian Renaissance has been constructed, whom it has favored, and whom it has sought to silence.”

In her first term at Duke, Driscoll will teach two courses: a first-year seminar focused on the history of race and power in European travel writing, and another studying “la querelle des femmes,” or “the woman question” – debates around gender and sexuality in Renaissance Europe that challenged women’s capabilities and intellect, sparking a robust response by women poets and philosophers, and their male counterparts.

Both courses are deeply rooted in texts from the 14th through the 17th centuries, yet make room for dialogue with more contemporary voices. “Gendering the Renaissance” thinks broadly across space and time to look at the written record of Renaissance women and gender as an unfinished, imperfect process.

Similarly, “Race and Power” transitions from voyages of “discovery” to the contemporary voices in post-colonial literature that rewrite that history, whether through autobiography or satire.  Students will be prompted to think not just in terms of the literature born from history, but in what follows in the waves those narratives make.

“If we are committed to thinking critically about the making of histories and identities and stories – and the many hands that participate in that making, over long periods of time – it reminds us that we're all still engaged,” Driscoll said. “We all still share responsibility. That is the kind of energetic awareness and stimulus I invite my students to reflect upon.”

In her time away from the classroom, Driscoll is called to nature. A native of New England, she looks forward to getting to know Durham’s green spaces, rivers, and trails.

“We spend so much time as intellectuals indoors staring at walls, windows and computer screens,” she said. “When I travel for work to conferences or talks, I bring my love for landscape photography with me. Anytime I can snap a quick photo and be reminded of nature’s spectacular canvas during a coffee break, I am a happy woman.”