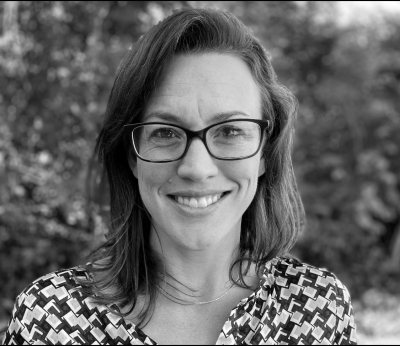 The Department of Romance Studies is excited to share profiles of our newer faculty over the next few weeks. Below read an interview with the department's newest Assistant Professor, Sarah Quesada. Her main areas of interest are literatures of the Global South, specifically Latinx, Latin American and African literatures. Quesada was previously an assistant professor of English and Latinx studies at the University of Notre Dame.

What excites you most about joining Romance Studies at Duke?

It is hard to think of just one thing! As a comparatist, I work with Latinx, Caribbean, and Francophone African texts, but also with UNESCO memorials, statues, and museums in Africa. So, in Romance Studies, it’s incredible to be part of such an interdisciplinary and polyglot space, to teach materials in different languages, and to be in dialogue just as much with my colleagues in Spanish as with my colleagues in, say, French. I grew up bicultural (Mexican and US American) and bilingual and then studied and worked several years in France and French-speaking locales. I also did fieldwork in Brazil in Portuguese. So I feel at home in this department and am looking forward to sharing my excitement about this multilingual and interdisciplinary approach with my students.

I love the conversations I have had during fieldwork with some of the most influential scholars and writers in this space. In Cuba, I was lucky to interview late Cuban intellectual Roberto Fernández Retamar who I managed to convince to spill the beans for an article on why Nobel laureate Pablo Neruda’s Caribbean corpus is so neglected (it turns out this was in part because of his beef with Marxist Cuban intellectuals that were not thrilled with Neruda’s visit to the US during the Cold War). I recently published this piece—not all the gossip is there, but some is now in the public domain! Then there are the famous people that upon meeting them, influence the entire direction of your work. Renowned philosopher Paulin Hountondji hosted me when I was doing my fieldwork in Cotonou, Benin, and one of the most prominent Senegalese writers, Boubacar Boris Diop, hosted me in St-Louis, Senegal. Informal conversations (in my rusty French) with them, and walking along heritage trails with Diop, for example, led me to consider how UNESCO physical together with “textual” memorials in narratives, tell this Latin-African story, a story in which Latinx and Latin American letters are imbricated in and haunted by Africa’s modern history from the era of the Slave Trade to the independence wars in Africa and beyond. So, I am lucky I get to research in different languages and speak to wonderful people, as it facilitates a nuanced approach to some of the most famous writers in the last fifty years who we never thought to read through this African perspective.

What are you most looking forward to teaching in the next year?

I am teaching a graduate World Literature course next spring called “Latin-Africa and the Global South.” It is a class that engages widely read authors of Latin American descent with African narrative  (French, English and Portuguese), and Atlantic early modern treatises. Some authors engage the colonial archives to identify how anti-black discourses are not exclusive to the American plantation and have also originated in Africa. Junot Díaz does this, for instance. As far as more recent Latin-African bridges, we discuss how Gabriel García Márquez’s writing about his travels through Angola might offer a counter to “Magical realism” or whether a Chicano poet is mimicking imperialist Henry Stanley in the Congo in a poem, or the different strategies of anti-apartheid women writing, whether in Mexican travel writing or Nuyorican internationalist politics. Other times, by placing together, say Wole Soyinka and Cuban-American writer Achy Obejas, we discuss the commodification of Black culture in heritage tourism. Or we’ll find that Nigerian Chimamanda Ngozi Adichie, US Chicana Gloria Anzaldua, and Cuban filmmaker Gloria Rolando together nuance a Global South feminism. Mostly, I am excited to teach how these comparative works engage with global social justice, from the removal of white nationalist monuments abroad, to programs such as Art Against Apartheid and the UNESCO Slave Route.

Have you discovered a favorite or unexpected place around Duke or Durham?

I absolutely love biking on Campus drive and along Duke Forest to get to my office on West campus. It’s a long, hilly, ride that reminds me of my years in Silicon Valley, except there is less traffic here and hills are much more forgiving! I especially like turning onto Flower Dr. toward the Languages Building to peek at the Sarah Duke Gardens. I might just move my office there. And Durham, I just love it!

If you could have dinner with three famous people from history, who would they be?

This is the hardest question! If it’s strictly literary, I’d have to say Sor Juana Inés de la Cruz, Frantz Fanon, and Puerto Rican poet Julia de Burgos, who was such a visionary but died so tragically.

I think I cheated with this question…